The pARTy is an open artistic collaboration that has so far, resulted in a performance commenting on hierarchies in everyday

society aswell as within the art world. By obviously magnifying the slogans of the Vietnamese people’s party and putting

the focus on the art-world instead of on the world of politics, The pARTy presents a manifesto that puts

The pARTy on top of the pyramid. The pARTy takes on the role as all artists leaders in an

experimental and ironic way. Not so different from what politicians,

at Hanoi Future Art in the final days of

May 2009, following weeks of pARTy meetings

and preparations. The performance contained a speech

which was delivered to launch The pARTy - the art party in everybody's hearts and minds.

Thanks to Jes Brinch and Vu Thi Trang for providing us with a great space and an inviting working environment. 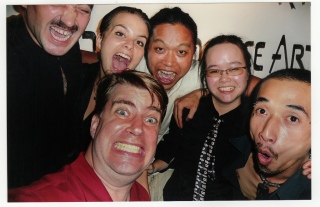